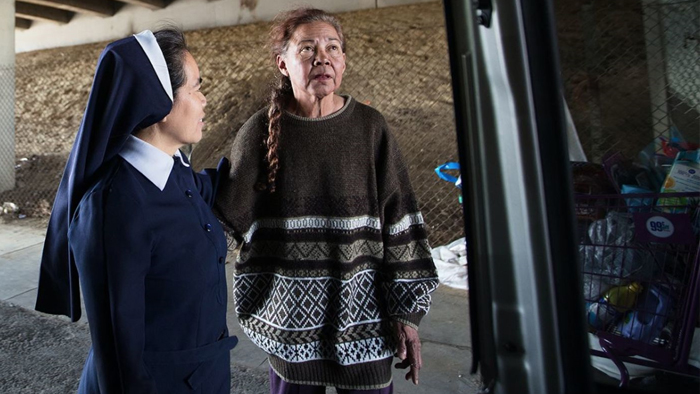 “Lady! Beautiful lady,” calls out Sister Rosaline Vu, opening the driver’s side door of the metallic Toyota van that has 94,000 hard stop-and-go miles on it. In her plain blue habit, she walks up to a dome tent back from the sidewalk. She says softly, “OK, wake up, Maria,” peeking inside.

A short woman wearing a long, heavy sweater over purple pants sits up and comes out, rubbing her eyes. Slowly, Sister Rosaline walks her to the van, asking, “How are you today?”

But Maria only wants coffee and bread. After five minutes of catching up, Sister Rosaline asks, “How long have you been on the street?”

“Two years this Christmas. I had an apartment with my sweetheart. We were together for 16 years until he passed away. But no marriage. So that’s the problem.”

Then a ride-along visitor asks what it’s like living here on the street.

Maria makes a concerned face with pursed lips. She says, “It’s not easy,” now in a different voice. “It’s not easy. But I used to live around this area and the neighbors know me. That’s the good thing.”

“So do you think you’ll stay here?”

She shakes her head. “I will do better than this. I just want to make it a little better for myself. I understand what Sister tells me about getting off the street. But I only get GR (General Relief welfare). It’s $221 a month. That’s why I’m here because I don’t have to pay the rents that are so expensive. With $221, I can’t afford it. My brother has a nice house, but his wife doesn’t treat me good. And instead of staying here, I would be way out in Hemet. But I don’t have friends over there. My friends are here, my neighbors.”

Finally, Maria is asked if she feels safe.

“Did you sleep last night?” asks Sister Rosaline. “No, right? That’s why you sleep right now? I saw the blanket moving and said, ‘Someone’s living here.’ “

Maria reports that there used to be others living nearby, but they moved away. She doesn’t know why or where they’re at. “I have to sleep in the daytime now because at night I stay awake.” And that’s all the information she wants to share today. She says, “Thank you, Sister,” turning around and walking toward her tent.