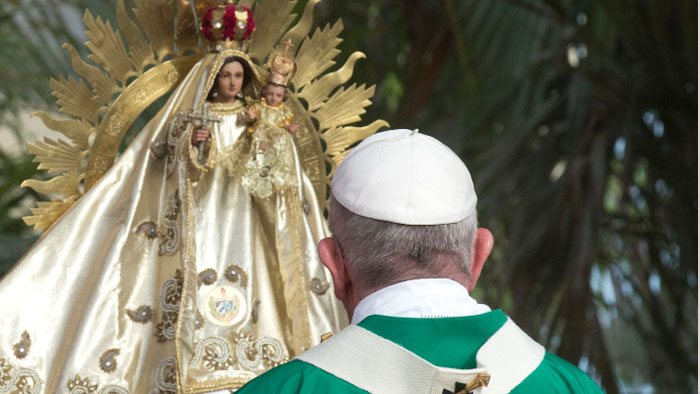 Vatican City: On Saturday, the Vatican announced Pope Francis’ decision that the Church celebrate the Blessed Virgin Mary in her role as “Mother of the Church” every year on the Monday after Pentecost, as a way to foster Marian piety and the maternal sense of the Church.

The decree establishing the memorial was published March 3 in a letter from Cardinal Robert Sarah, head of the Congregation for Divine Worship and the Discipline of the Sacraments.

As Sarah explained, Pope Francis added the memorial to the Roman Calendar after carefully considering how the promotion of devotion to the Blessed Virgin Mary under this particular title might encourage growth in “the maternal sense of the Church” and in “genuine Marian piety.”

The cardinal noted that the “joyous veneration given to the Mother of God by the contemporary Church, in light of reflection on the mystery of Christ and on his nature, cannot ignore the figure of a woman, the Virgin Mary, who is both the Mother of Christ and Mother of the Church.”

The memorial of the Blessed Virgin Mary, Mother of the Church, has been added to the General Roman Calendar, the Roman Missal, and the Liturgy of the Hours. The Latin text has been published, and the translations will be prepared by the bishops’ conferences and approved by the congregation.

A celebration of a memorial generally means that prayers and readings specific to the day’s memorial are used in the Mass.

The Marian title of “Mother of the Church,” was given to the Blessed Mother by Bl. Pope Paul VI at the Second Vatican Council. It was also added to the Roman Missal after the Holy Year of Reconciliation in 1975.

Subsequently, some countries, dioceses and religious families were granted permission by the Holy See to add this celebration to their particular calendars. With its addition to the General Roman Calendar, it will now be celebrated by the whole Roman Catholic Church.

In 2018, the memorial of the Blessed Virgin Mary, Mother of the Church, will be celebrated on May 21.