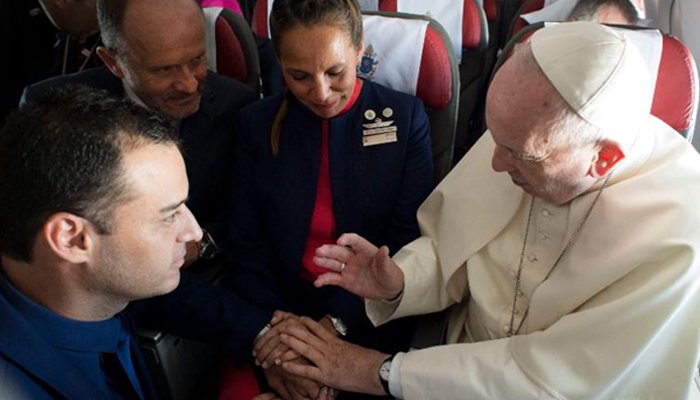 For the first time in Papal history Pope Francis officially married two flight attendants on the Papal plane. Carlos and Paula who were civilly married tied the knot with Pope Francis performing the ceremony. The couple had tried to marry in 2010. The ceremony had to be called off because of the 2010 earthquake in Chile. Vatican spokesman confirmed that the handwritten wedding certificate was valid and signed by Pope Francis. The planes passengers pulled double duty serving as passengers and witnesses to the ceremony.

The newlyweds told journalists on the plane that it was Pope Francis’s idea. Pope Francis said to the couple “This is the sacrament the world is missing.’ The sacrament of marriage. Hopefully this will motivate the couples around the world to enter into the sacrament of marriage. That’s why I am doing this.” (Pope Francis). The couple said that Pope Francis offered them marriage advice as well “He also told us that we should not use wedding bands that are too tight because they are like torture. But, if we used really loose ones, they will fall off. So we had to be careful.”(Pope Francis). After a short break, interview  and a kiss in front of journalist the couple told the crowd to take their seats so they can secure their the cockpit for landing.