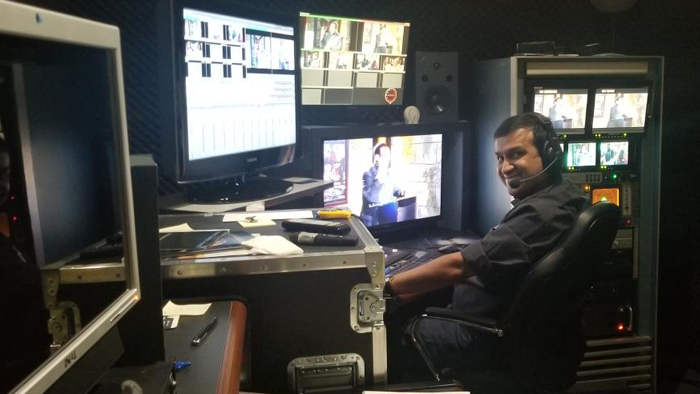 SAN BERNARDINO—One of the great challenges for the Church today is how to utilize digital and social media to evangelize. Pope Francis has called Church ministers to take on the responsibility for the evangelization of the “digital continent,” encouraging all to announce the Gospel to their contemporaries with enthusiasm.

Following this mandate and reading the signs of the time, San Bernardino-based Wordnet Productions has expanded operations from its roots in television programming to more current modes of delivering content, focusing on streaming and apps.

Wordnet offers a streaming channel, WordNet TV (WNTV), with a growing number of inspiring Catholic program series. “The Power of Love” and “Waking Up in America” feature interviews of ordinary people sharing extraordinary faith and ministries. “Word Made Flesh,” “All Things Are Possible,” and “Live with Passion” provide a spiritual banquet of Catholic thought and prayer.

Live, in-studio presentations of Catholic theology with audience participation debuted in late summer, and there are plans to air them digitally in the near future. The first season featured seven episodes of Dr. Matthew Petrusek’s “Reasons to Believe.”

Access to the Channel is easy. Download the WordNet TV App on your TV (through Roku, Apple, Amazon Fire, Android or Chromecast), computer, or any device. Go to wordnettv.net for our webcast schedule and archived programs. Wordnet also has its own YouTube channel, “Wordnet Productions.”

Two reflection apps, iGodTODAY and DIOS HABLA, offer connection with God through the Scriptures of the day. Wordnet staff and others share related thought and prayer for three minutes.

“It is such an exciting time to be in media ministry,” says Father Soney Sebastian, SVD, Director of Production. “We are now very intentional in our use of digital media because it’s such a great opportunity to give people an experience of faith as they go through their day.”

The Wordnet studio has been operational in San Bernardino at 5th and D Streets since 2004, but the ministry was begun in Riverside in 1978 by Fr. Manning, who had a vision, even then, that media was a powerful tool for evangelization. Although Fr. Manning was called to his eternal rest in 2016, the Wordnet staff has carried on and moved the ministry into the new frontiers of media.

In addition to pre-recorded programming for faith reflection and evangelization, Wordnet has branched out into topical, documentary video productions. Earlier this year, they produced and released “Project BIENVENIDA,” which chronicled the diocesan ministry to asylum seeking migrants at Our Lady of Soledad parish in Coachella. Currently, Wordnet is finalizing an interfaith promotional video to raise awareness of the importance of the Violence Intervention Program (VIP) in San Bernardino. This is an effort of the City of San Bernardino, local police, nonprofits and the faith community to reduce the number of murders in the City.

“We’ve been so grateful to work on these projects of partnership and community service,” says Sister Patricia Phillips, SHCJ, Executive Director. “We are eager to do more of that and our door is always open to community groups who want to use media to further what they are doing.”

A new group, Wordnet Champions, is being formed to promote Wordnet programs as a solid source of Catholic evangelization among friends, family, parishes, co-workers and everywhere in between—an opportunity to share time and talent with the People of God!