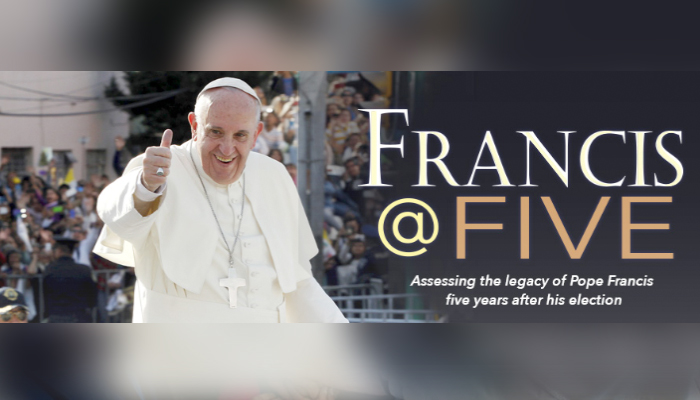 The discussion, which comes as Francis is set to mark the fifth anniversary of his election in March, will take place from 6:00 p.m.-7:30 p.m. at Fordham University’s Lincoln Center campus in New York City.

Titled “Francis@Five: Assessing the Legacy of Pope Francis Five Years After His Election,” the discussion will be moderated by David Gibson, Director of the Center on Religion and Culture at Fordham University. The CRC is co-sponsoring the event along with the Religion News Foundation and Religion News Service. Toronto-based Salt + Light Television is the media partner for the event.

“Massimo and Ross offer two important and distinct perspectives on Pope Francis and his impact on the church universal, and especially the pope’s impact on the U.S.,” said Tom Gallagher, President and CEO, Religion News Foundation, and CEO and Publisher of the foundation’s subsidiary, Religion News Service (RNS). “We are very excited to have a lively debate on such an important figure in the church and in the world,” said Gallagher.

Gibson, a former national reporter for RNS who has covered the Vatican and the Catholic Church for years, added that it was fitting that a Jesuit university should host a discussion about the first Jesuit pope in history.

“Francis has called for open and honest debate about pressing issues facing the Catholic Church and the world,” Gibson said. “His own pontificate has raised the profile of many of those issues, so part of our mission is hosting a discussion like this.”