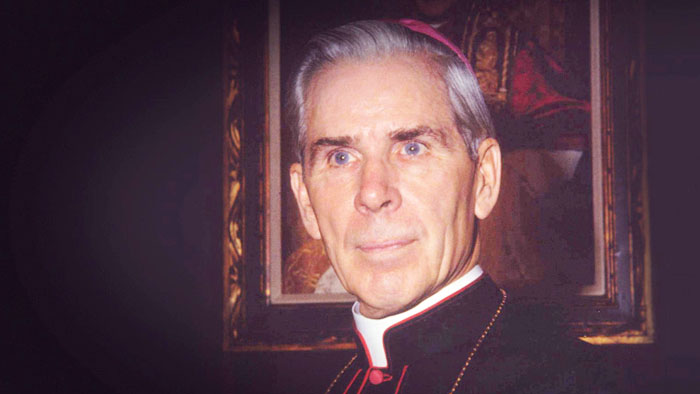 Vatican City – The late Archbishop Fulton Sheen, a charismatic figure of U.S. Roman Catholicism in the 20th century and a pioneer in using media for religious purposes, is one step closer to sainthood. A Vatican statement on July 6 said the pope had approved a decree recognizing a miracle attributed to Sheen’s intercession, meaning he will be beatified. No date for the ceremony was given.

James Fulton Engstrom, an apparent stillborn, was delivered without vital signs on September 16, 2010. For 61 minutes, he lay without a heartbeat as his parents, Bonnie and Travis, prayed for the intercession of the late Archbishop Fulton J. Sheen. As doctors prepared to declare James deceased, his heart began beating, and soon rose to a normal rate. James, once presumed dead, is now “a healthy eight-year-old” who “likes chicken nuggets, ‘Star Wars’ and riding his bicycle,” according to Catholic News Service.

Sheen, who was born in Illinois in 1895 and died in New York in 1979, was sometimes called the first “televangelist”. Between 1930 and 1950 he hosted “The Catholic Hour” on the NBC radio network, which had an audience of four million. After the resolution of a years-long dispute over the proper burial location for Sheen’s remains — his remains were recently transferred from New York, where he died in 1979, to his hometown of Peoria, Ill. — the Vatican finally confirmed the miracle on Saturday. Fulton J. Sheen will now be beatified, with inevitable canonization efforts soon to follow.